Before I was dissed and covid-dismissed I worked at a large firm. In fact, a lot of little guys were and we were equally desposed of a la used Kleenex tissues in hayfever season.

Quickly and without remorse.

The last time layoffs of this magnitude had occurred at this firm it was 2008 during the financial crisis when 400 people were fired in one morning. I witnessed one man pull down his trousers and boxers and proceeded to have a dump right on the revolving doorstep on his way out.

Much chaos and panic ensewed as I’m sure you can imagine – and a heated debate regarding the disposal of said excrement began. The turd was exactly half on company property and half outside on the public thoroughfare so the cleaning crew for the council and the cleaning crew for the building were at odds as to who had the unwelcome responsibility to “handle” the sticky situation.

Since the lockdown it has been a nightmare trying to get another job.

I was naively relieved to discover a mass of job ads start to pop up online at one point. Hurrah! Salvation! I applied for seventy jobs and yet didn’t hear back from a single one. I touched base with agency contacts, made new ones, “zazzed” up my linkedin profile, rewrote my cv, waited by the phone… and …. nothing.

The more I applied for these “immediately available” jobs the more I became disheartened.

I had a solid CV, I was available, these placements needed to be filled asap…. and yet I wasn’t even getting a call about them?

One of the agencies I was with put an ad up on LinkedIn saying that they had an embarrassment of Virtual Assistant positions free and they were hiring straight away.

I sent my cv off and two weeks later I received a sheepish email admitting that actually they were just thinking about creating virtual assistant roles but didn’t in fact … you know… have any available. They were preemptively posting the ad “for the sake of morale.”

It was then that my sneaking suspicion was finally confirmed. A lot of these ads were fake.

I was equal parts horrified and thrilled. Because on the one hand I was getting very depressed because I couldn’t understand why (if there were SO many jobs available) I wasn’t successful in my hunt… But on the other – this “fake ad” situation opened up a whole new can of psychological worms.

The truth was, there was just no work out there. Period.

And that my friend is terrifying.

Offices were closed and not currently hiring, so were shops and pubs. Anything you might usually be able to do to make ends meet was not possible because of the pandemic.

To my surprise it’s a known thing in the recruitment industry to post fake job ads purely to lure in new CV’s and inject their system with fresh faces.

As the lockdown continued there were even open discussions happening on LinkedIn about the wave of fake job ads.

To add insult to injury after discovering that 99% of my job hunt struggles were based on weird recruitment industry propoganda – job agencies were now stooping to gaslighting applicants via email in order to get them to complete unessasary training simply to justify their own existence. Which sickened me and yet I was also unsurprised.

I really hope the job market opens up soon and that once life eventuallly returns to some semblance of normality recruitment agencies are made accountable going forward. As candidates we have to endure psychological tests in the form of intrusive psychometics, complete typing and competency tests, have our backgrounds and credit ratings scrutinised… and yet the agencies are not held to any form of standard. A lot of agents don’t bother to read CV’s properly and a candidates worth is weighed up in the comission they will acrue. Which is incredibly unfair.

If this job hunt has taught me anything it’s that I need to develop a steady side hustle to keep me going in uncertain times like these.

I hope other people are feeling the same way. Maybe at the end of 2020 we can escape all the bullshit of the rat race and agencies and corporations spouting their kumbaya crap together.

– and leave a steaming shit on their doorstep before we go. 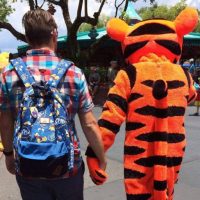 The Mottled Macaroon by Blair Roxlin is licensed under a Creative Commons Attribution 4.0 International License.

A blog full of tips, inspiration and freebies!

Lions can wear glasses too

Tails Around the Ranch